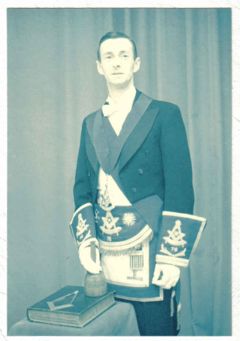 Russell's was RWM in Lodge 76 in 1968 and was Secretary to the Lodge since 1973 a total of 35 years which was no mean feat. His reward was  the post of Honorary Grand Lodge Assistant Grand Secretary in 1998.
He was also a member of Stirling Rock Royal Arch No2, Balfron Cryptic Council No.555, Greyfriars Preceptory and Stirling Castle Conclave No.14. He was also a member of the Perth Sovereign Chapter of Princes Rose Croix No.71 (an 18th Degree Mason).